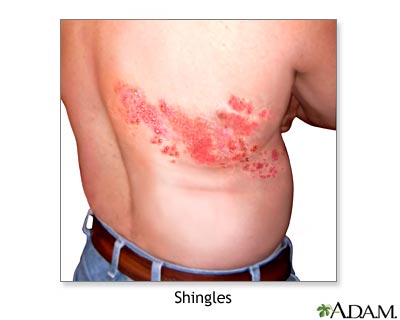 An acute, unilateral, self-limiting inflammatory disease of the central nervous system, specifically the cerebral ganglia and the ganglia of the posterior nerve roots, and peripheral nerves caused by the Varicella Zoster virus which presents initially as a red rash that later accumulate fluid to form vesicles is a disease called Shingles. It is also referred to as Herpes Zoster, or simply, Zoster. Beginning as red, slightly elevated, circumscribed lesions that, in the course of 7-10 days, develop into vesicles and later dry up forming crusts in the characteristic and definitive Shingle Rash.

Varicella Zoster virus is the main culprit of both these two clinically distinct diseases. Primary infection of the mentioned virus causes Chicken Pox. It is characterized by vesicular rash or lesions developing of the face, trunk and extremities. The rash usually starts midline of the person’s body and spreads towards the sides and extremities. Herpes Zoster, also well known as Shingles, results from the awakening or reactivation of endogenous latent Varicella Zoster virus. This form of disease is characterized by a painful, unilateral, vesicular rash, which usually occurs in a restricted band along the skin following the underlying affected nerve pathway.

The rash of Herpes Zoster starts as erythematous papules (red, circumscribed elevation of skin with no visible fluid), which quickly evolve into clustered vesicles (small, fluid-filled skin sacs or blisters measuring less than 5 millimeters in diameter) or bullae (fluid-filled skin blister more than 5mm in diameter). Within three to four days, these fluid-filled lesions become more elevated and occasionally hemorrhagic. In immunocompetent hosts, or those people of strong immune system, the Shingle Rash will dry up and crust by 7 to 10 days and are no longer considered infectious.

The inflammation is usually unilateral, involving the thoracic, cervical, or cranial nerves in a band-like configuration. The blisters are usually confined to a narrow region of the face or trunk. The region of the skin affected that follows the underlying affected nerve path is called the dermatome. The Shingle rash is often found clustered and confined within a dermatome. This dermatome can remain depigmented and hypoalgesic, or having little to no sensitivity to pain.

Herpes zoster in generally healthy adults is usually localized and benign. The Shingle rash and inflammation is commonly limited to one dermatome in healthy hosts, but can occasionally affect two or more neighboring dermatomes. However, in immunosuppressed patients, the disease may be severe and may be acutely disabling.

Pain is the most common symptom of Herpes Zoster. Approximately 75% of affected people experience prodromal pain on the affected dermatome where the Shingle rash will subsequently appear. Prodromal pain, which may radiate over the entire region supplied by the affected nerves. The pain may be burning, lancinating (tearing or sharply cutting), stabbing, or aching. The pain may be constant or intermittent preceding the Shingle rash for several days to weeks. Some individuals describe the pain only when the affected region of the body is touched or induced by simple mild brushing against the skin.

This pre-eruptive pain precedes the rash for several days and is often misdiagnosed. It is often mistaken as Myocardial infarction, dental pain, biliary or renal colic and other gastrointestinal disturbances such as duodenal ulcer and appendicitis.

This phenomenon is called “zoster sine herpete”. The nerve pain is not accompanied nor preceded by a skin lesion eruption, though this is noted in very rare cases only.

Before getting into the specifics of the nerve pathways affected by this dreaded Herpes Zoster, let us first review the basics of the Peripheral Nervous System and nerve paths. A picture will be presented below to clearly illustrate the different groups of peripheral nerves, namely the Cervical, Thoracic, Lumbar and Sacral nerves, and the body regions it corresponds. These body regions are the so-called dermatomes that the nerves are responsible in both the sensory and motor abilities. 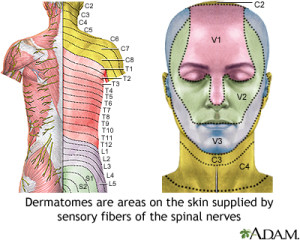 Cranial Nerves. When the virus invades the cranial nerves, the skin lesions, inflammation and pain is felt in most the face. Patient may have eye pain, or may experience the opposite, which is loss of feeling in one or both eyes. Infection in the cranial nerves often contaminate the ophthalmic nerves thus the eye involvement. The infection may even threaten one’s vision. The rash may appear starting from the scalp, around the eyes then down to the tip of the nose, called the Hutchinson’s sign. The prodromal pain will be felt upto the ear area and may can temporary hearing loss of some ringing in the ears. Loss of taste and dry mouth may also be detected.

Cervical Nerves. The Shingle rash is usually seen starting from the back of the neck or the nape, central line and spreading to either left or right side of the body, to the shoulders down to the forearm. This dermatome is supplied by the cervical nerves. The skin lesions will be contained in this dermatome, usually along a single band. The inflammation and skin lesions may cause pain with the slightest touch or movement.

Thoracic Nerves. The thoracic nerves are responsible for the motor and sensory of the trunk, including the anterior and posterior chest, abdomen, down to just above the buttocks area. When the Varicella Zoster virus infects the thoracic nerves, the skin rash and inflammation are more likely to be seen at the above mentioned body regions. The classical pattern for shingles follows a nerve root from the spine, along a rib, to the front of the chest. The spread follows a media-distal pattern, or from the center of the body outwards to the extremities. The inflammation and skin rashes may cause pain also with the slightest touch especially with clothing with is excruciating and almost miserable.

Avoid picking at and, let alone, scratching the skin sores. (Doing so will further deepen the sores, or maybe open up those already dried up lesions.

Cool, moist compresses over the lesions. (This can be done if doing so helps ease the discomfort. This can help decrease the itchiness because cold compresses constrict blood vessels that will therefore lessen sensory.)

Use calamine lotion after compresses, though not recommended.

Apply cornstarch or baking soda to skin blisters. (The cornstarch and baking soda can help dry up the skin sores quickly. This is not recommended especially when the blisters are open for it may contaminate the lesions. Use with caution.)

Remember, the Shingle rash will get the best out of you. But knowing what to expect and what to do will lessen the burden.

One thought on “Shingle Rash”